Audited financial results of JSC VENTBUNKERS for year 2015 show, that revenue in 2015 has reached EUR 58.6 million. Increase in revenue was provided mainly due transshipment volume of dark oil products, which had increased by 17% in comparison to 2014 and reached 2.54 million tons in 2015. In 2015 amount of light oil products transshipped is 0.4 million tons which is almost double the amount transshipped year before. Overall results of JSC VENTBUNKERS operations in 2015 show that company has been able to maintain a relatively stable market share and volume of services provided during challenging economical and geopolitical situation.

In 2015 more than 320 employees had been continuously employed by the transshipment terminal and the total sum of taxes paid to the state and municipal budgets in 2015 exceeded EUR 3.7 million. 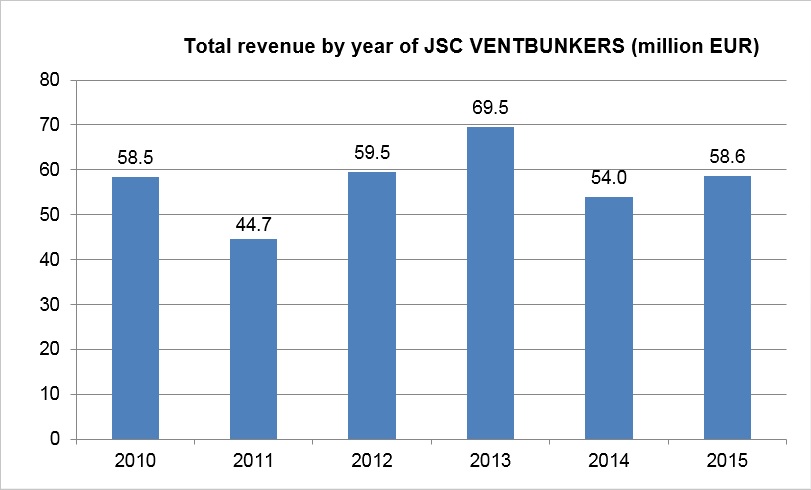 Investments in proper maintenance of terminal’s infrastructure and gradual modernization of its technologies are keystone to strategic development of JSC VENTBUNKERS. Starting 2012 onwards JSC VENTBUNKERS has gradually resumed increasing the annual amount of investments, which had shrunk since 2008 when one of the main projects – expansion of tank farm No.7 was partly accomplished. In 2013 and 2014 JSC VENTBUNKERS concluded agreements with Ventspils Free Port Authority regarding investments in the Freeport area, providing substantial investments during the period from 2014 to 2018 in return for tax relief as provided by law.

In 2014 technological investments were made in the terminal in order to provide simultaneous storage and transshipment of various sorts of light oil products, including storage and transshipment of biodiesel. Also competent state authorities have issued licenses allowing blending various light products during the transshipment process in behalf of the clients, obtaining fuel of certain required quality. In 2015 JSC VENTBUNKERS invested EUR 1.6 million in capital assets, continuing modernization of technological processes in the terminal, such as increasing pump station capacities, as well as implementing a number of fire safety, environmental protection and ecological safety related projects. 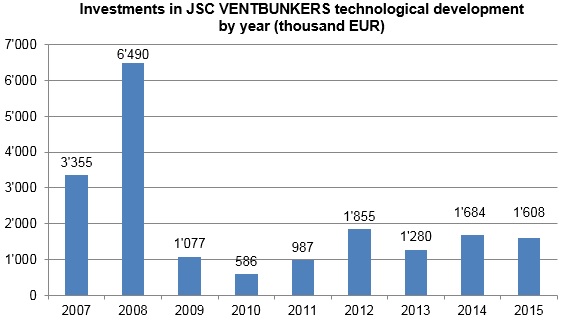 JSC VENTBUNKERS management keeps working intensively to maintain economic and technological advantages of the terminal during the current complex economic and geopolitical circumstances, and to retain current level of transshipment volume also in the following years. One of the main goals is to increase transshipment volumes in certain market segments, positioning JSC VENTBUNKERS as important partner offering competitive service conditions.

JSC VENTBUNKERS plans to constantly improve its technologies, to increase efficiency of the thermal energy usage, reduce volumes of emissions per unit of the transshipped oil products and improve risk management. Development strategy provides for:

– rational planning and building in the available territory;

JSC VENTBUNKERS is working on innovative technical solutions for improvement of terminal’s handling and transshipment capacity during winter season at low temperatures. Cheaper and more efficient, and environmentally friendly thermal energy carriers are sought for production needs and for technological processes.

Also, an important priority is the protection of the environment by improving the existing situation and taking preventive action. Most efficient technological solutions are being sought for development of oil products vapor collection infrastructure in the terminal.